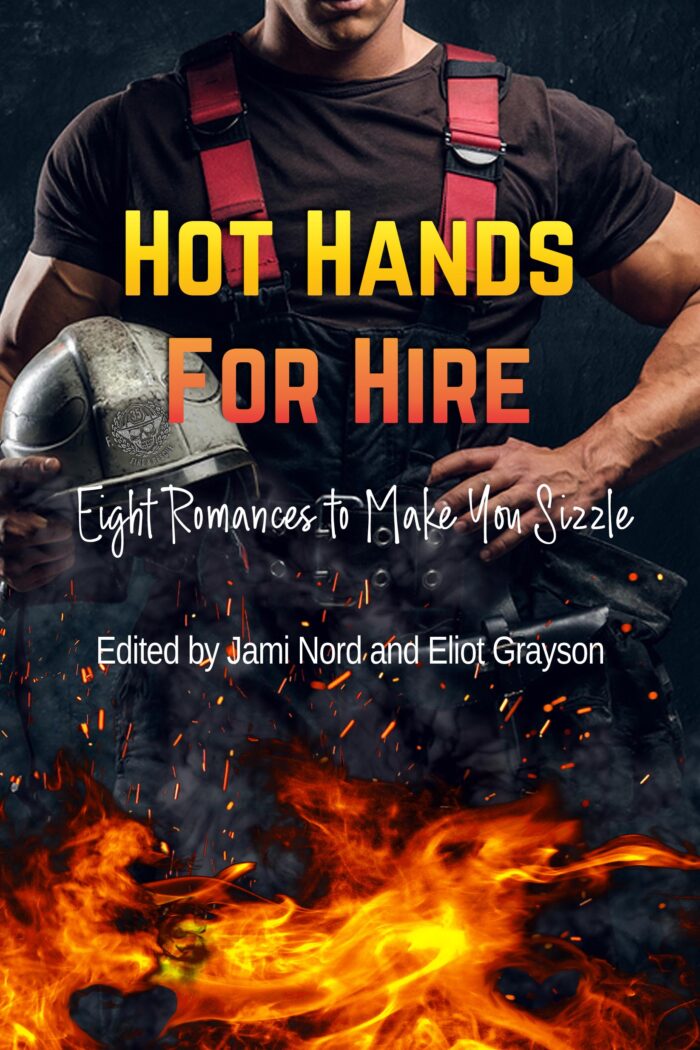 Sideways – Part of the Hot Hands for Hire Anthology

Newest Flirty Bit of Fluff release, SIDEWAYS is part of a firefighter anthology – HOT HANDS FOR HIRE on Amazon.  https://amzn.to/2SQsDAM

Melby Davis knows something is missing from her tedious life as a 4th-grade teacher … until an unconventional relationship with her sexy firefighter/handyman neighbors, Dave and Eddie, knocks her sideways and threatens her job.

Will she fall into line to maintain her boring, lonely life … or find the courage to stand up for what she wants and enter a ménage à trois relationship with two sexy-as-hell men who want only to make her happy, in every possible way.

Loud thumps on my front door reminded me that the doorbell needed to be fixed. Or not, it was one of those obnoxiously high-pitched things and I could usually ignore most folks at the door. Not whoever was outside now. The framed picture of my roommate Willow and I listed with each knock. I snagged my keys from the hook near the door, turned the safety off the pepper spray and peeked through the peephole. Holy hotness. Dave and Eddie, my neighborly firemen, were outside.

“Enough!” I unhooked the chain, flipped the deadbolt, and opened the door.

“Hey, we heard you were wet and came to help.” Eddie bit his lip and waggled his eyebrows.

Dave slapped Eddie on the back of the head. “What the dumbass meant to say is that your downstairs neighbor has a water stain on his ceiling and we gotta check your bathroom.”

I opened the door and stepped back. The guys were wearing their official “Hot Hands for Hire” t-shirts. The apartment manager often contracted with the app for maintenance around the complex.

I’m pretty sure most of the ladies in the building, and probably some of the guys, have broken stuff on purpose just so they could ogle Eddie and Dave fixing it.

I needed to bake Mr. Daniel cookies for his maintenance call later.

Eddie strode in, a toolbox in one hand, dwarfed by Dave behind him. Dave was gargantuan: flat nose, thick brow, and hair tied back. And, hello, his shoulders had their own zip codes, stretching his t-shirt to its tensile breaking point, so thin I could see nipples. He was physically perfect. And staring at me like he knew I was thinking about climbing him.

“Good slogan.” I pointed to the yellow letters painted on and clinging for dear life because honestly, the man had to be a XXXXL and the letters were stretched out. “From pipes to printers, we’ve got an off-duty firefighter with hot hands to hire for your every need.”

“Thanks,” Dave nodded with a knowing grin.

For months, I couldn’t manage to put more than three words together when talking to Dave. It’s not like he was intimidating, although, yeah, he was a bronzed Hulk. But he was nice. He and Eddie organized the Monday Night Football potlucks in the clubhouse. Dave had attempted to explain football to me. He was patient, and also an adolescent goof whenever he was with Eddie. And more man than I could ever manage.

Way out of my safety zone.

“Bathroom is down there.” Four words, all sensible.

“Have you heard any dripping?” Dave’s dark eyes were laughing at me.

“Nope.” I veered off to the kitchen and opened the fridge door, hiding behind it.

I hoped the cold air would counteract the heat rising up my face.

“Wow…” Eddie’s hushed voice reminded me that Willow and I had our bras currently drying over the shower door.

I tore into the bathroom, ricocheting off of Eddie’s chest, and grabbing all lacey items and squirrelling them under my sweatshirt. “Can we just pretend that didn’t happen?”

Dave shrugged. “Yeah, sure.” He swallowed and pulled his hand down his face, like he was trying to erase the image. “So, uh, do you want us to move the shampoo bottles and stuff?”

I poked my head into the shower, hugging the pile of undies to me and hoping there was nothing untoward in the stall. Willow’s Queen V wash stood tall and proud next to my shampoo. “Give me a sec.” I stood and waved them outside. I tossed everything into the sink cabinet and then looked through our medicine cabinet, pulling out the box of condoms.

There should be a checklist for single women about what to check for before letting guys into your apartment. I’d be checking Pinterest later…

I glanced at my reflection in the mirror to find a red face, glossy eyes, hair in a wild bun on the top of my head. Eh, par for the course…

I opened the door and both guys leaned against the wall, arms crossed with matching sexy grins. So hot…And I was so not.

“Thanks.” I stumbled into my bedroom and tucked the lingerie under my comforter. I’d sort it later.

I texted Willow who was still at school for her drama club: Dave and Eddie are here because our bathroom is leaking.

Oh shit, tell me you checked the bathroom before letting them in.

I didn’t answer. She’d figure it out.

For my best friend, sometimes she enjoyed my awkwardness too much. I returned to the kitchen and checked on the chili cooking in the crock pot, then sat down to grade homework. I wondered if I could persuade the guys to come talk to the kids for my injury prevention unit in health class. I guessed if Dave told them to wear a bike helmet, they’d take it more seriously than when I said it.

When I’d finished grading, I walked down the hallway and leaned against the bathroom door frame. Eddie was crouched down inside our shower, his back to me.

“You don’t like the way I hold my caulk?” Eddie turned and winked when he saw me standing there.

“I’ve never been one to tell a man how he should handle his caulk, but since you asked, you got some weak moves there.” Dave turned and faced me, raising an eyebrow.

Was he daring me?

“I don’t know, he kinda gives me caulk envy.” I batted my eyes.

Dave’s threw his head back and laughed.

Eddie sat back on his haunches. “No freaking way. Nice one, Melby.”

His approval sent both a thrill and embarrassment through me. I studied Dave’s boot. His huge boot. “I was wondering if you guys would be willing to come to my classroom sometime and scare the kids into using their helmets, and other personal safety stuff like that.” I managed to sweep my eyes up Dave’s hulking form to his dark eyes.

“For you, absolutely.” Dave’s smooth voice settled my embarrassment but set off a new flock of butterflies.

“That’d be great. Um, I’ll let you get back to it.” I turned and skittered down the hall. Eventually, I needed to be able to talk to them and not blush.

I really shouldn’t. I should finish my work. But they were man candy and I had an insatiable sweet tooth. And it’s not like I was flirting. Besides, I wasn’t into dating bronzed mini-Hulks, but they sure were nice to look at.

Plus, I was dating Brian, and it was exclusive.

Hard to bring up exclusivity when we’d never even made it past first base. We’d been camped out there for so long it felt like we might become permanent residents.

I stopped at the doorway and leaned against the frame.

“What?” I was going for cool indifference, but probably just looked constipated.

Dave looked over to the bathtub, now ringed with bright white caulk. “Tell Eddie, honestly, what you think about his caulk.”

I slapped my forehead. “You two are worse than my fourth grade students.” But I eyed Eddie’s biceps and ignored his eye roll.

Eddie gave me a knowing smirk. “Your fourth graders couldn’t handle this caulk.” He patted the caulk gun in his hand and switched it to his other hand. “I can totally work my caulk with both hands.”

I’d like to see that. “Ambidextrous.” I swallowed, my mouth suddenly dry. “The word you’re searching for is ambidextrous.”

Eddie tilted his head to the side, both eyebrows raised. He had gorgeous grey eyes. Seriously. Not pale blue—they were grey, like a drizzling cloudy day, the kind that makes you want to snuggle in bed and read for hours.

“Is it though? Is that the word I want?” He waggled his brows then faced the shower. “But seriously, you can’t use the shower for at least three hours, and it’d be better if you waited until the morning.”

I stepped back into the hallway with the two guys close at my heels.

“Are you moving?” Dave stopped at my bedroom and pointed to a dozen boxes stacked next to my bed.

Both Eddie and Dave sported the WTF face. Eddie tilted his head ninety degrees and read some of the box labels. “‘Stuff. Stupid stuff. Useful stuff. Stuff I hate.’ You sure got a lot of stuff.” He leaned his shoulder against mine.

“I’m in the process of reducing my stuff. It felt cathartic to just…” I waved my hands, like that could explain my frenzied decluttering. “I don’t have to justify myself to you,” I said with a huff.

An indecipherable look crossed Eddie’s beautiful face. He didn’t argue, instead his eyes softened, accepting me and my crazy.

Dave grinned stupidly. “Jesus, you really are a mess.”

“Hey, not cool.” I pushed them out of my bedroom and toward the front door.

“Under the bed, duh.” Dave winked.

“Take your caulks and go.” I pointed to the front door.

Dave stepped close with a sad-puppy look. “You … don’t want our caulks?” His deep voice reverberated through my body, sending shivers down my spine to settle low in my belly. “Are you sure about that?”

I gritted my teeth and gave him my teacher glare. Of course, I wanted their caulks, but I’d dated the flirty fun guy and all I got out of it was a ton of credit card debt and the clap. I was perfectly happy with my introverted, considerate, gentle, compassionate, emotionally-aware boyfriend, or whatever the heck we were.

“Let’s go.” Eddie opened the front door. “I don’t want to get detention.”

Dave groaned. “Damn. Now, I’ve got that hot for teacher song in my head. Thanks for the earwig, dude.”

I pushed Dave out and closed the door.

Every conversation I’d ever had with those two began and ended with innuendo. Individually, they were professional, helpful, even sweet. But together? Adolescents.

Too much adolescence stuffed into two adult bodies.

But the minds of adolescents.

And I wanted a man.